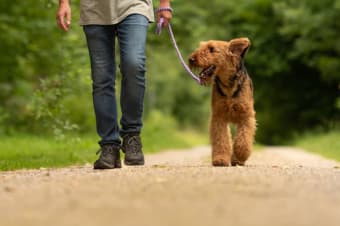 Seizures can be triggered in dogs due to a number of factors ranging from heat exhaustion to epilepsy. Here, our Glendale vets share some of the reasons that dogs have seizures, and what you should do if your dog has a seizure.

Seizures in Older and Younger Dogs

Witnessing their dog have a seizure can be upsetting for a pet parent. Some dogs recover quickly from seizures and never have another, whereas others may have seizures for the rest of their lives due to illness or epilepsy.

Seizures in dogs can take many different forms, some more obvious than others, but the majority are very brief. You may notice muscle twitching or uncontrolled jerking movements in your dog if he is having a seizure, but a seizure can also include loss of consciousness, unusual eye movements, or drooling. If you believe your dog has had a seizure, contact your veterinarian immediately.

If your dog has been having a seizure for 3 minutes or longer or has experienced multiple seizures in a row, contact your vet or emergency vet immediately.

What causes seizures in dogs?

Regardless of the underlying cause of the seizure, all seizures are caused by faulty electrical activity in the dog's brain, which results in a loss of control over the body. Seizures in dogs can be caused by a variety of factors, including:

What dog breeds are prone to seizures?

Every dog within these breeds will not experience a seizure in their lifetime, however, the following breeds tend to be more prone to seizures than others.

Can a seizure kill a dog?

If there is a chance that your dog is having a seizure due to poisoning, if your dog's seizure lasts longer than 5 minutes, or if your dog has multiple seizures in a row, then the seizure indicates a serious health threat. Contact your vet immediately, or your closest emergency veterinary hospital.

When to call the vet?

Most seizures are short, lasting less than 3 minutes and with proper treatment, the pet can lead a normal life. That said, seizures can be a serious health concern and even short seizures could cause brain damage. If your dog suffers a seizure that continues for more than 30 minutes serious permanent brain damage could result.

If you see your dog having a brief seizure and then he or she quickly recovers, notify your veterinarian. Your vet may recommend that you bring your dog in for an examination, or they may simply make a note in your dog's records and ask you to bring your dog in if it happens again. Seizures that are not explained are common in dogs, but some dogs will continue to have seizures throughout their lives due to underlying conditions.

Treatment for Seizures In Dogs

If your pet is experiencing an emergency, contact your emergency animal hospital in Glendale immediately.

Limehouse Veterinary Clinic is accepting new patients! Our experienced vets are passionate about the health of Glendale companion animals. Get in touch today to book your pet's first appointment.